As the Knicks blackout approaches its second week, it’s anybody’s guess who will win the high stakes standoff between Time Warner Cable and James Dolan’s MSG Network. The only thing that’s certain is the fans lose.

Subscribers to Time Warner Cable have been denied the pleasure of watching the last three Knicks games. To the dismay of fans, during this stretch neither TWC nor MSG has felt compelled to return to the negotiating table, although talks are set to resume next week. Instead, the two rivals have busied themselves with marketing campaigns that cast the other as the villain. This bid to win the hearts’ of the fans is ultimately a red herring. No matter which side is “wrong”, the fan still gets screwed. This theme of the exploited consumer is conspicuously absent from the mainstream media’s coverage of this story. The exception is Bob Raissman’s fiery article that appeared in Saturday’s New York Daily News.

What makes things even worse for Knicks fans is that they have no recourse. Other than Satellite TV, TWC is the only cable provider in the neighborhood - a point that is underscored by Verizon FIOS’ decision to curtail expansion of its service. Even if consumers were motivated to ditch TWC in favor of Dish or DirecTV, they’d have to abandon their “triple play” with TWC and ultimately have a much higher monthly bill.  This phenomenon is not unique to New York. Cable companies across the US enjoy deep entrenchment thanks to the triple play which dampens the threat of what little competition there is.

If you were lacking any evidence that the cable subscription business needs to be disrupted, look no further. 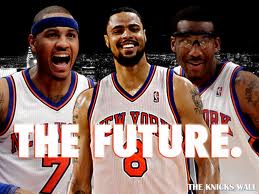 But fear not Knicks fans, recent history is on our side. Even as TWC and Dolan hold us for ransom, they ignore a truth that brought down the record label business: In the digital era, industries that prioritize corporate earnings over user experience are destined to be disrupted. The music industry’s dogged insistence to sell $20 CDs instead of a la carte tracks was undermined by pier to pier services like Napster and ultimately replaced by iTunes. Although Knicks fans can’t depend on P2P to save the day, technology behemoths Google, Apple and Microsoft are ready to check into the game. Move over Chandler, Melo and Amare, here comes another Big Three.

Microsoft Xbox Live:  At Center, 7 Feet from Redmond is Xbox Live.  What entered the living room as a video game console has turned out to be a Trojan horse for Microsoft. In recent months, Xbox has shed its gamer garb to reveal itself as a next generation set-top box.  Boasting a subscriber base over 20 million strong, Xbox Live is larger than any cable provider in the country except for Comcast.  It has the scale to negotiate directly with premium content providers like Dolan’s MSG and the deep pockets to ink a deal. In fact, ESPN3 has been available on Xbox Live for over a year. The entertainment options don’t end there – Netflix and Hulu are available and now even Live TV from certain cable providers. To put it in perspective, as a whole, Xbox Live users spend more time using their console to watch TV shows, sports, and movies than they do playing games.

Google TV:  Coming off the bench as the 6th man is Google TV. Despite its initial flop as a Logitech set-top box, Google TV is ready for a comeback. This time around, it’s embedded into the hardware of TV sets made by Samsung, LG, Sony and Vizio (there will also be a new set-top box variety).  Like Xbox, Google TV is an alternative to the clunky and inefficient set-top boxes issued by the cable providers. It uses the Android Operating System so you can use your mobile phone as a remote controller.  More importantly, developers will be able to create Android based apps to revolutionize how consumers watch TV, much like apps revolutionized mobile phones. Presently, the two most important apps are YouTube and Search.

Apple TV:  As a great visionary, Apple TV is the starting point guard.  Apple, who is rumored to be working on its own TV set, began its infiltration into the living room with the Apple TV set-top box. The centerpiece of the experience is iTunes, which already features a robust assortment of a la carte programming.  Presently, Apple TV offers consumers a complement to regular TV.  In order to compete outright, Apple will need to boost its library of content. The good news is that Apple, like Microsoft and Google, has the deep pockets to pursue this strategy in earnest.

For Knicks fans stuck with Time Warner Cable, these next generation alternatives couldn’t come soon enough. In the meantime, Knicks fans should unite on Twitter to air their grievances with Time Warner Cable and MSG. It’s a fan’s right to be able to watch these games.  Neither TWC nor Dolan should be able to take that away.  Now all we need is a catchy hashtag.  How do you like #FansRights?